A History of Brewing in Frankenmuth 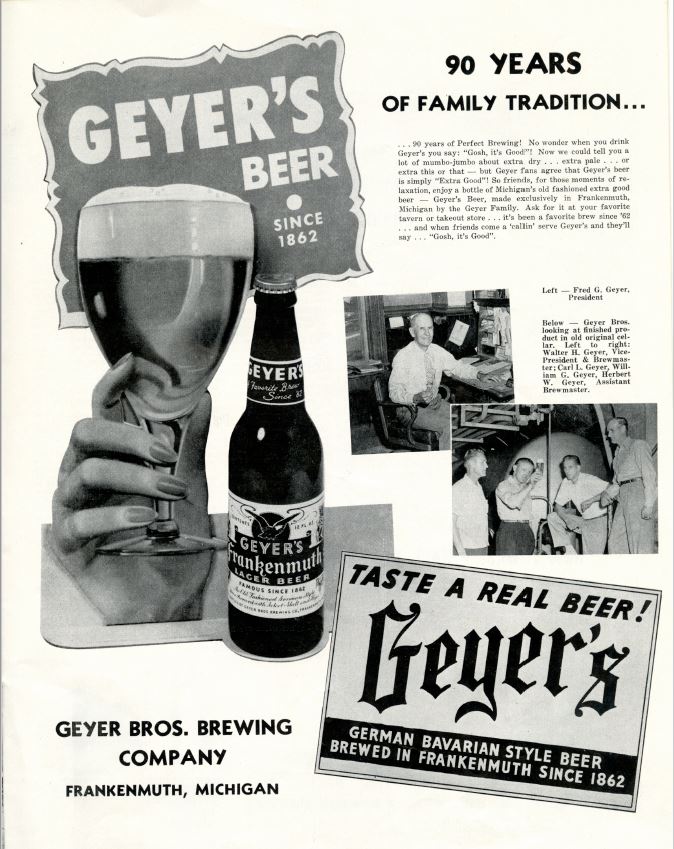 Thanks to our founding settlers, brewing beer has been in our Frankenmuth heritage since 1857. Excerpts from John Smallshaw’s, Brewing In Frankenmuth, Michigan, essay gives us the history of beer and brewing in Frankenmuth.

John Matthias Falliers was the first man to brew beer in Frankenmuth. He had come from his native Bavaria and set up a tin shop with his wife. Seeing an opportunity to quench the thirst of the new settlers he set up “The Frankenmuth Brewery” in 1857. While the beer did not have the same quality as in their native Bavaria; at least the residents of Frankenmuth now had beer! It was a small brewery and the brew kettle only had a capacity for 200 gallons. The brewery ceased operations in 1864 and Mr. Falliers died just two years later.

The first really successful commercial brewery was started by cousins William Knaust and Martin Heubush in 1862. Christened The Cass River Brewery it was located just two city lots from Fallier’s brewery. The cousins operated it until 1874 when they sold it to John George Geyer. Geyer operated the plant with his brother J. Michael so the plant was renamed Geyer Brother’s Cass River Brewery. 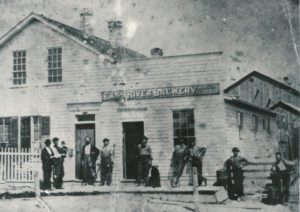 The Geyers expanded the plant in 1890, and it was expanded for a second time after Prohibition was repealed in the late 1930s. Geyer trained his two sons, John L. and Fred, in the art of brewing beer and they eventually took control of the business in 1908. The name was then shortened to The Geyer Brothers Brewery.

April 30, 1918 was a sad day for Michigan beer drinkers. Prohibition came into effect and the manufacture and sale of alcoholic beverages was prohibited by law. The Geyer brothers survived by producing malt extract, which was allegedly used in the baking of bread but 99.9% ended up as a base for the home brewed grog of Frankenmuth residents. With the election of FDR came a repeal of the Volstead Act, and the Geyer Brothers began producing legal beer again. 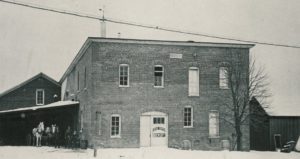 Cass River or “Geyer Brothers” Brew House. This is now the site of the current Frankenmuth Brewery.

In 1949 John and Fred Geyer both retired and turned the brewery over to their five sons. One of the sons, John Jr., would later became the assistant brewmaster of Stroh’s in Detroit. By the 1960s, Geyer Brothers was not only the smallest surviving brewery in Michigan, but now the second oldest. Only the Stroh Brewing Company of Detroit had a longer continuous history of operation. But such a small enterprise had virtually no chance against the marketing muscle of the big national brewers.

They operated the company until October 1, 1986 when Geyer Bros. Brewing Company ceased operations. On October 5 th, 1988, Fred Schumacher and Ervin Industries reopened the former Geyer Bros. facility as the Frankenmuth Brewing Co., Inc. They produced a Frankenmuth Pilsener as well as a variety of specialty and seasonal beers. Their beers were well received and won several medals at the Great American Beer Festival.

But on June 21st, 1996 a tornado hit Frankenmuth destroying 4 homes and damaging 130 others. Sitting directly in the mile long path of the twister was the brewery, which suffered substantial damage. It was never to reopen. Wrecking crews came in on August 30 th , dismantling everything but the brew house.

In June 2003, a brewpub and restaurant called the Frankenmuth Brewery opened on the site of the former Geyer Bros. Brewery. 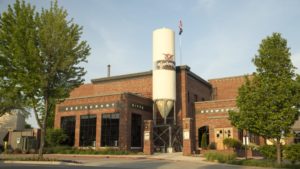 A third brewery was organized in Frankenmuth in the late 19th century, and wast o be far more commercially successful than the tiny Geyer Brothers concern. In 1899, John Adam List had called for a meeting of interested shareholders, some of whom brought wads of cash that had been stored under beds and in barns. Without the FDIC, putting your money in a bank in those days was a risky investment! 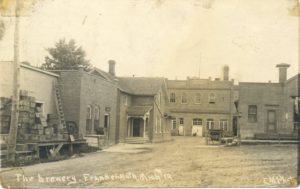 The original Frankenmuth Brewery. This is now the current site of the Frankenmuth RiverPlace.

The brewery began production a year later. The original capacity was 10,000 bbl per year and was delivered to taverns in kegs by “The Brewer’s Big Horses”. Local residents also purchased the beer in kegs and bottled it at home, using ceramic stoppers and wire to close the bottles. The original flagship brand was Gold Medal Beer and the company was also known as the Gold Medal Brewery. With the advent of Prohibition in 1918, the brewery ceased all operations for 6 years. 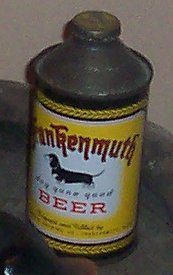 In 1924 the plant was purchased by Otto Rosenbush of Detroit. Like the Geyer Brothers, Rosenbush saw the opportunities in producing malt extract for home brewers. He refurbished the plant and hired Frank Freundel as his “brewmaster”. The company reopened as the “Frankenmuth Products Company” and also produced a non-alcohol beverage called “Franko”.

When brewing beer became legal again, the name of the company reverted back to the “Frankenmuth Brewing Company” and plant capacity was expanded to 100,000 bbl annually. This dwarfed their tiny rivals the Geyers across town. The brewery prospered and in 1934 was sold to a group of investors in Detroit. Its shares were now listed on the Detroit Stock Exchange and it was growing into a brewing powerhouse in the state. In 1939 Frankenmuth Brewing purchased the struggling Kentucky Brewing on south 15th street in Louisville in an effort to expand its base. But management problems and wartime shortages caused the brewery to close the Kentucky plant permanently in 1942. 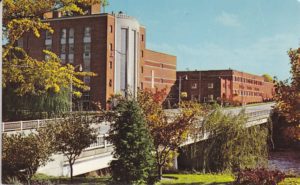 Carling Brewery. The current site of the Frankenmuth RiverPlace Shops

In 1955 the shareholders voted to sell out to a newly formed corporation, International Breweries, Inc. After operating it for only one year, International decided to sell the Frankenmuth brewery to Carling’s of Canada. At the time Carling was the fastest growing brewery in North America and would eventually have 22 plants in the U.S.A. and Canada. Plant manager L.M. Freidinger stayed on as a vice president for Carling and manager of the Frankenmuth site.

Carling modernized the plant and increased its capacity to 800,000 bbl per year. It had the reputation of being the safest brewery in the country and worked 13 years without a single accident. But Carling’s fortunes changed in the 1970s. It went from the fastest growing brewer in the country to the one with the greatest decline in sales year after year. National’s best known brand at the time was Colt 45 Malt Liquor. But National’s management also could not stop the fall in sales and four years later Carling-National Breweries sold out to powerhouse G. Heileman Brewing of LaCrosse, WI. In 1983 Heileman undertook a major expansion of the Frankenmuth brewery, costing in excess of $9 million and increased capacity by 50%. In November of that same year, production reached one million barrels, a feat never before achieved.

In 1987, Australian businessman Alan Bond purchased G Heileman for the astronomical sum of $1.7 billion. It was to prove the undoing of the Heileman empire and the beginning of the end of the Frankenmuth brewery.

Enter your email to receive our occasional email.
Contact Us

We’re an independent insurance agency offering a comprehensive suite of insurance solutions to protect your business and your life from the unexpected.

We don’t just sell insurance. We work closely with clients to help them make important and informed decisions every day when it comes to protection and their future.

We're here when you need us most. Call email or stop by.